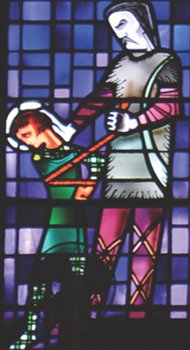 Saint Patrick was chiefly responsible for converting the Irish people to Christianity. Patrick was born in Roman Britain around 387 AD. His father was a wealthy alderman and a Christian. Although Patrick grew up in a comfortable Roman villa, young Patrick was not interested in his father’s Christian faith.

However, when Patrick was sixteen years old, Irish raiders captured him and sailed back to Ireland where they sold him as a slave to a farmer who lived in Antrim. For the next six years, Patrick served as a slave-shepherd, tending the flocks of an Irish chieftain in Ulster. 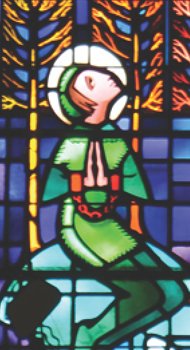 During his captivity, Patrick wasn’t treated very well, but he prayed to God every night. Then one night Patrick heard the voice of God telling him that his ship was ready. Patrick thought he was dreaming, but God told him he wasn’t. God led Patrick to a shipping port on the Irish coast 200 miles away. Patrick persuaded the captain of a ship to allow him aboard, and he made it back safely to his family in Roman Britain. While at home in Roman Britain, he continued learning about his Catholic faith.

As a result of his experiences in Ireland, Patrick became driven by the idea of converting the Irish to Christianity. To prepare himself for that task, he studied in the monastery of Lerins, on an island off the southeast coast of France. Patrick also went to Auxerre, France, and studied religion under Saint Germanus, a French bishop. Partly because Patrick’s earlier education was inadequate, his religious superiors were reluctant to let him return to Ireland as a missionary. But when Palladius, the first Irish missionary bishop, died in 431, Pope Celestine I sent Patrick to Ireland. 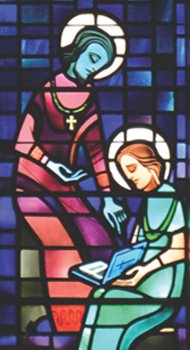 Patrick began his work in northern and western Ireland, where no one had ever preached Christianity. When Patrick began to preach, the people were astonished that he understood their customs and way of life. He gained the trust and friendship of several tribal leaders and soon made many converts. Patrick told them about Jesus’ death on the cross to save them, and invited them to belong to God’s family by being baptized. He baptized thousands of people in a land that was mostly pagan. He ordained priests to lead the new communities of Irish Christians. 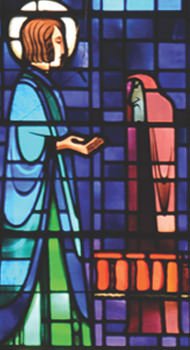 He converted wealthy women, some of whom became nuns in spite of family opposition. He converted the sons of kings. He refused to accept gifts from kings in order to be free to preach the gospel to everyone without distinction. At one point enemies of Patrick arrested him and held him in prison for 60 days.

Patrick is said to have founded more than 300 churches and baptized more than 120,000 people. Patrick also brought clergymen from England and France for his new churches.

Patrick’s writings serve as the most important source of information about Patrick’s life and work. During his later years, he wrote Confession, an account of his spiritual development in which he justified his mission to Ireland. In Confession, Patrick expressed his humility and thankfulness that God called him to serve the Irish. Patrick also introduced the Roman alphabet and Latin literature into Ireland. After his death, Irish monasteries flourished as centers of learning. 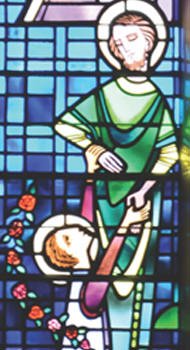 Patrick spent the final sixty years of his life in Ireland. During that time he consecrated 350 bishops to carry on the faith. He died on the 17th of March in 493 AD in Sabhall in County Down. His grave is in Downpatrick, also in County Down. 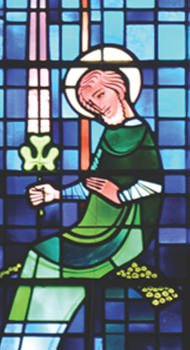 Many stories about Patrick are based only on legend. In one of the best-known tales, Patrick wanted the people to understand what God was like. When they were confused about the Trinity, Patrick used the petals of a shamrock leaf to explain the Three Persons in one God. God the Father, God the Son and God the Holy Spirit are each a petal on the shamrock, but together they make a single shamrock leaf.

Many people believe the shamrock came to be the traditional symbol of Ireland as a result of this legend. We celebrate Saint Patrick’s Feast Day on the 17th of March. The illustrations in this biography of Saint Patrick come from the large stained-glass window in the front our church that depicts the amazing life of our parish’s patron saint.