Most Reverend George V. Murry, S.J. Fifth Bishop of the Diocese of Youngstown

Funeral services for our Bishop George V. Murry, S.J.  will be celebrated on Friday, June 12.  Bishop Murry was the fifth bishop of our Diocese of Youngstown.  He died June 5 at approximately 6:15 a.m. at Memorial Sloan Kettering Hospital in New York after a two-year battle with leukemia. He was 71.  His funeral Mass at St. Columba Cathedral in Youngstown will be private due to pandemic guidelines on mass gatherings, and will be presided by Cincinnati Archbishop Most Rev. Dennis Schnurr, the Youngstown diocese’s metropolitan bishop.  You can view his funeral Mass livestream on Friday, June 12, at 1:00 p.m. by going to www.WKBN.com  Also, more information regarding coverage of calling hours, Evening Prayer, Morning Prayer, as well as the funeral Mass can be found on the diocesan webpage www.doy.org

The College of Consultors for the Diocese of Youngstown, which is made up of six priests, met recently to choose a Diocesan administrator, who will oversee the jurisdiction of our diocese until the Vatican names Bishop Murry’s permanent successor.  Rev. Msgr. Robert Siffrin was chosen to be the Diocesan Administrator.  Most likely, Pope Francis will not name a new Youngstown bishop for at least a year.

At the end of May 2020 Bishop Murry announced his intent to resign as bishop, after 13 years leading the diocese, citing “reasons of ill health” in his letter to Pope Francis.  He battled two reoccurrences of acute leukemia. He was first diagnosed in April 2018 and soon after stepped back from his daily duties with the diocese. He recovered and then returned to the diocese on a part-time basis that September.Bottom of Form  The cancer returned in July 2019, however, and he underwent a second round of treatment, which put the disease into remission.  Bishop Murry’s leukemia returned again in April 2020. He was receiving outpatient treatment at his home, until his admission to the New York hospital Monday, June 1, 2020.  Even before Bishop Murry received the diagnosis of leukemia he was a man of patience. He truly weighed all the aspects of any decision that he needed to make for the good of the Diocese of Youngstown. He did not move hastily, but put his dependence on God.

George Vance Murry was born on December 28, 1948 in Camden, N.J., the son of the late George and Viola (Brown) Murry.  He has one brother, who resides with his wife and family in Omaha, Nebraska. Saint Pope John Paul II in January 1995 appointed Bishop Murry Titular Bishop of Fuerteventura and Auxiliary Bishop of Chicago, where he was ordained to the episcopacy in March 1995. In June 1999 Bishop Murry then became Bishop of the Diocese of St. Thomas in the Virgin Islands.  He then succeeded Bishop Thomas J. Tobin as the fifth bishop of the Diocese of Youngstown, [preceded by Bishops McFadden, Walsh, Malone and Tobin].  He was installed on March 28, 2007 at St. Columba Cathedral in Youngstown, becoming the first African-American bishop to lead our diocese.

Bishop Murry also served on the U.S. Catholic Conference of Bishops committee to address racism, which developed the conference’s pastoral letter on racism, used as an educational tool in church jurisdictions across the country.  He was also among 18 members appointed to the Ohio Task Force on Community-Police Relations by then-Governor Jon Kasich.

Bishop Murry attended St. Joseph College Philadelphia in Pennsylvania, St. Thomas Seminary in Bloomfield, Connecticut and St. Mary Seminary in Baltimore, Maryland, where he received a Bachelor of Arts degree in Philosophy in 1972. He entered the Society of Jesus (the Jesuits) that same year and was ordained a priest June 9, 1979. He earned a Master of Divinity degree from the Jesuit School of Theology in Berkley, California in 1979 and a doctorate in American cultural history from George Washington University in Washington, D.C. in 1994. 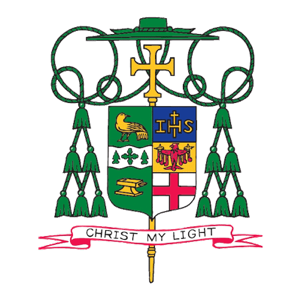